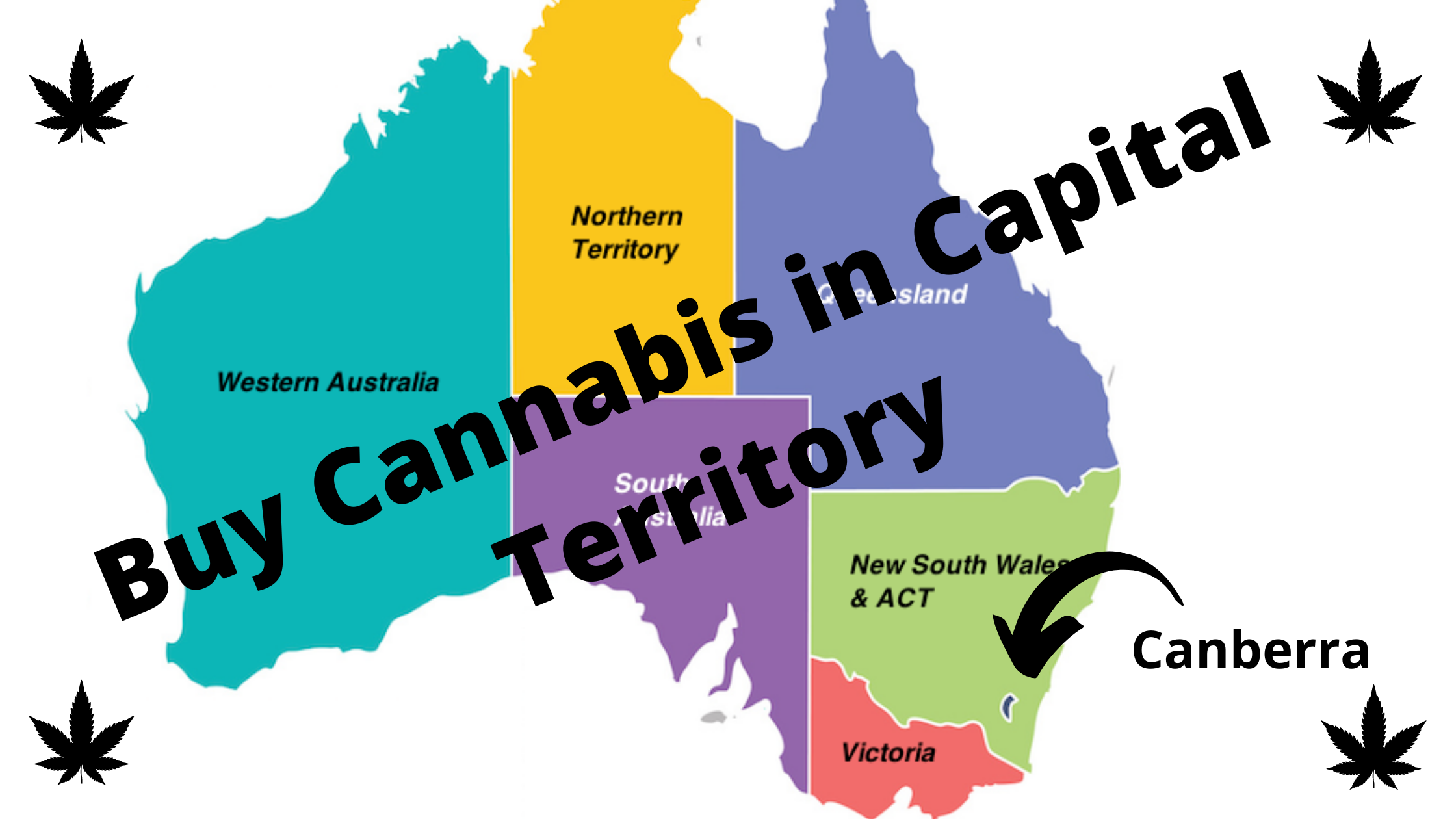 Cannabis is an incredibly popular plant in Australia. Research shows that at least a third of the country’s population has used weed at some point in their lives. However, despite is enormous popularity, marijuana laws in the country remain rigid and strict.

In the past few years, though, activism has led to some relaxation in marijuana regulation. This is particularly true in the country’s capital, Canberra, and the metropolitan areas surrounding it. Today, you can grow your cannabis in the Australian Capital Territory, although under relatively stringent conditions.

With over 90 different marijuana strains to choose from, picking the right plant to grow in your back garden can be challenging. Thankfully, however, we have put together an in-depth guide to selecting the correct strain and growing it under the best conditions for the best yields. Read on to find out what the law says about growing cannabis in the Australian Capital Territory, and how to buy Cannabis Seeds Capital Territory.

Is It Legal To Buy Cannabis Seeds in the Australian Capital Territory?

Australia is a highly conservative state when it comes to marijuana regulation. The country’s criminalization of weed use dates back to the early 20th century, and the law hasn’t changed much since then. Today, growing and possession of marijuana for recreational use remains illegal, mainly according to federal regulations.

Be that as it may, states have some discretion in regulating the use of the plant. Canberra, for instance, has some of the laxest laws regarding the possession and use of marijuana. The state decriminalized growing and possessing weed for recreational use in January 2020.

However, you can only cultivate two cannabis plants per person or four plants per household. The plants must be grown on private premises where children and members of the public cannot easily access. The plant must also be grown under natural conditions; it is illegal to cultivate the plant using hydroponics.

With regards to possession, you can carry up to 50 grams of dried cannabis without risking a fine or imprisonment. The legal limit of carrying fresh weed, on the other hand, is 150 grams. The law criminalizes public use of the plant as well as driving under its influence.

Marijuana is medically used to minimize chronic pain, reduce the symptoms of depression, and restore appetite. The use of cannabis for medical purposes in Australia was legalized in 2016. However, a person must have a valid prescription for using medical marijuana Canberra to avoid any legal trouble. The weed in question must also meet the requirements set out by the Therapeutic Goods Act.

Cannabis laws in Australia are always changing. Although it is legal to buy Cannabis Seeds Capital Territory or grow some plants in the ATC, these laws are subject to review in three years. Besides, the rules are in direct conflict with federal provisions on the legality of marijuana. This is why you ought to be careful when you buy Cannabis Seeds Capital Territory. You should regularly check for any changes to marijuana regulation to ensure that you don’t land on the wrong side of the law.

Can You Get Seeds Shipped to Australia?

Due to the stringent marijuana regulations in Australia, you would be hard-pressed to find a brick and mortar shop where you can buy Cannabis Seeds Capital Territory. This is why it is best to buy weed seeds online. But knowing the online seed bank from which to buy Cannabis Seeds Capital Territory can be a challenge. This is why you should go with a highly reputable weed seed retailer like ILoveGrowingMarijuana.

The company is internationally known for selling high-quality weed seeds. Although it is based in the United States, it does ship marijuana seeds to Australia. The seeds are transported most discreetly to avoid attracting unwanted attention, especially from law enforcement agencies. They will arrive at your doorstep at the scheduled time in an unmarked envelope. The shipping process is stress-free and efficient.

Apart from its excellent shipping policy, the company also sells with top-grade seeds with an 80% rate of germination. With ILoveGrowingMarijuana, you can expect to get a high yield and superior quality flowers, which will make your smoking experience phenomenal. The company also includes a free weed growing guide to help you through the cultivation process.

Another reason you should buy Cannabis Seeds Capital Territory from our company is to sell our products at the fairest prices. Our prices may not be the cheapest on the market, but for the quality of seed that you get, they most certainly are competitive. We strive to strike a balance between being exorbitantly expensive and questionably cheap.

If you are new to weed cultivation, choosing which strain of marijuana to grow can be confusing. It helps to know the breeds that exist and the types that are best suited for your tastes and purposes.

Generally, there are three types of weed seeds: regular, feminized and autoflowering seeds. Regular seeds contain a mixture of both male and female plants. They require a lot of care as they grow because you must separate the males from the females once they reach maturity. The process, known as culling, is essential in ensuring that the females proceed to the flowering stage so that you can harvest flowers for smoking.

If you leave the males and females together, the males will fertilize the females who will proceed to produce more seeds instead of flowering. This will make all your effort and investment in the cultivation process meaningless.

Feminized seeds, on the other hand, contain only female seeds. Caring for them is not as demanding as caring for the natural plants as there is no risk of fertilization. However, these seeds are sensitive to light intensity. Changes in light energy trigger the transition from the vegetation stage to the flowering stage. Therefore, you will need to monitor the amount of light exposure that the plants get for the best yields.

You can also buy the Cannabis Seeds Capital Territory that is of the autoflowering variety. They autoflowering plants because their transition to the flowering stage is not dependent on changes in light intensity; they simply begin to blossom as soon as they reach maturity. Most autoflowering plants are also feminized, which makes them the easiest to grow.

They can begin flowering in as little as ten weeks, while other types take at least four months to grow. However, they do not grow to a large size and are remarkably small compared to feminized and regular plants. They also contain low THC levels owing to their Ruderalis heritage.

Apart from the breed of weed seed Canberra, you should also consider the THC and CBD that your select strain contains. THC is a psychoactive compound found in marijuana that produces the high associated with the plant. If you want to buy Cannabis Seeds Capital Territory for recreational purposes only, you should choose a strain with at least 24% THC concentration.

If, on the other hand, your main aim for growing marijuana is to enjoy the medical benefits of the plant, you should buy Cannabis Seeds Capital Territory with higher CBD levels. This compound is known to ease chemotherapy’s side effects, such as nausea, loss of appetite, and chronic pain.

It lowers the risk of fatal convulsions in epileptic patients. Moreover, CBD is an effective remedy against anxiety and can ward off insomnia efficieAlthough weed with high THC levels gives users a commendable high; it can also exacerbate symptoms of depression and anxiety. Some users may also experience slight paranoia after smoking the pot. This is why it is advisable to buy Cannabis Seeds Capital Territory that contains a balance of THC and CBD; it evens the effects of too much brain stimulation.

Now that you know what you should consider before you buy Cannabis Seeds Capital Territory, it is now time to look at the three most popular weed strains in the ATC. These are:

Auto pineapple feminized seed Canberra is a hybrid of the Pineapple Chunk and the Skunk # strains. They yield large flowers and have a short growth period of 60 days. You can expect them to start flowering in about three weeks since transplanting.

This pungent-smelling strain of weed in Canberra contains high THC levels, much like its parent plant, the Pineapple Chunk. When smoked in small doses, it produces a pleasant effect of euphoria and unparalleled relaxation. It is the type of weed that is best smoked before going to bed or on a lazy afternoon because it makes you feel comfortable and at peace with the world. It can also reduce pain and treat insomnia. However, taken in large doses, it can cause slight paranoia or hyper excitement.

Another popular strain of weed in Canberra is the Blood Diamond OG feminized strain. The breed grows quite fast and can be ready for harvesting in less than ten weeks. It also contains high THC levels, which makes it ideal for recreational use. This woody-smelling, earth-tasting weed strain is known to produce euphoria if used in high doses, and calm relaxation when used in small amounts. It can also offer relief from anxiety and arthritis.

This weed strain of Kush ancestry has an attractive woody appearance and produces small flowers. However, it has a short growth period and a high concentration of THC. Due to its potency, it is an excellent choice of weed strain for recreational use.

You can order your supply of Auto Pineapple Feminized, Blood Diamond OG Feminized, and Legend OG Feminized seeds on ILoveGrowingMarijuana and have it shipped to you at a standard price of $25 for all orders below $150. If you buy Cannabis Seeds Capital Territory worth more than $150, you won’t incur any shipping costs.

Marijuana laws in Australia are complicated and continually changing. However, at the moment, carrying up to 50 grams of dried weed and 150 grams of fresh pot remains legal. You can also grow two plants of grass per person or four plants per household.

If you decide to grow your weed, it is best to buy Cannabis Seeds Capital Territory from a reputable seller like Mediseed Man. Not only will you be getting the highest quality weed seeds, but the seeds will also be shipped to you quickly and discreetly. Try the company today; you will not regret it.